Partnered by Mathieu Baumel in a Toyota Hilux, Al Attiyah captured the drivers’ title with a winning margin of 21 mins 12 secs from Argentina’s Lucio Alvarez and Spain’s Armand Monleon in a Toyota Hilux Overdrive.

Fastest on each of the four previous stages, Al Attiyah was content with a third best time today as Alvarez took the honours, while Russia’s Denis Krotov and Konstantin Zhiltsov in a Mini John Cooper Works Buggy secured the other podium place

While the Qatari must now wait until next month’s final round in Saudi Arabia to clinch the FIA World Cup drivers’ title, the Abu Dhabi Desert Challenge produced world champions at the double. 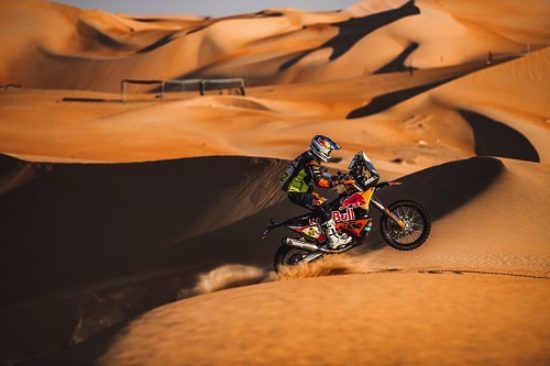 Spain’s Cristina Gutierrez and Frenchman François Cazalet in an Overdrive OT3 are FIA T3 champions after finishing runners up today to Saudi Arabia’s Saleh Alsaif and Russian co-driver Egor Okhotikov who were comfortable winners in another Can-Am Maverick.

New FIM RallyGP champion Walkner on a KTM claimed the bikes crown by 4 mins 31.8 secs from Adrien Van Beveren, despite the Frenchman winning the 162.94 Km Yas Marina Circuit stage for his third fastest time. Portugal’s Joaquim Rodrigues on a Hero took the other podium place.

Giving the UAE a victory to acclaim ahead of the host country’s Golden Jubilee celebrations next month, Abdulaziz Ahli won the quads title by a huge margin from Poland’s multiple world champion Rafal Sonik, and Argentina’s Manuel Andujar who had led for three days.

“This is a rally that has everything, as we’ve seen over the last 30 years, and have seen again this week,” said Mohammed Ben Sulayem, President of the Emirates Motorsports Organization (EMSO) and FIA Vice President for Sport. “We look forward to many more anniversaries.”

A jubilant Al Attiyah said at the finish, “It’s quite an amazing feeling to win this race for the third time. It was not easy, so that makes winning even better for me. One thing I have learned is that if you want to win, you need to work very hard – everybody, the crew, the team. Only then will you get results like this.”

Walkner was equally elated, “Finally, this was a really good rally,” he said. “I survived it to the finish line and I am super happy with this incredible win here. The team has done an amazing job and it is cool to win the last race of the season.”

“Winning my first world title also gives me a lot of confidence. But it was also very important to finish this race well and then look to the challenges ahead.”

The UAE’s Sultan Al Balooshi on another KTM completed the top six, while South African Michael Docherty clinched an overwhelming victory in Rally2.

New quads champion Ahli said at the finish, “Finally I did it, and I feel good arriving here. All the hard work paid off. I had a tough fight with Manuel (Andujar) and found it hard to keep up with him because of my bad finger. I’m happy and proud to be here.”

Walkner’s victory in the RallyGP bikes was a masterpiece of tactical riding. The Austrian did what he needed to do in order to win, as he had already done in wrapping up the FIM Cross Country Rallies World Championship before this final round started.

Fastest only on the opening super special, which decided the starting order for the main course, he followed up with second place on all five desert stages.

Third stage winner Daniel Sanders, lying second overnight on his GasGas, suffered the cruellest of finishes. The Australian ran out of fuel 200m from the end of the stage, slipping to eighth after pushing and coaxing his bike home.

The Czech Republic’s Martin Prokop and Viktor Chytka in a Ford Raptor RS Cross Country had a runaway victory in the class for 2022 specification cars.