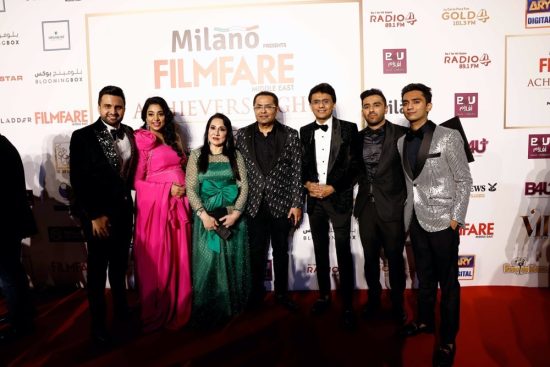 Bollywood’s most contemporary celebrities – Kajol, Vivek Oberoi, Shruti Haasan, Nawazuddin Siddiqui, Nora Fatehi, Sunny Leone, Mohammed Ramadan, Urvashi Rautela, along with Bollywood veterans– Zeenat Aman, Shatrughan Sinha, Poonam Dhillion, Prem Chopra, Ranjeet, Gulshan Grover – along with more had teamed up with a strong line-up of Pakistani celebrities and Arab performers – that created the most memorable entertainment night akin to the regional version of the Oscars or the Cannes Film Festival – at the Filmfare Middle East Achievers Night at the Meydan Grandstand on October 28.

They were joined with star musicians Udit Narayan, Sonu Nigam, Kanika Kapoor, Amaal Malik, who set the stage on fire and got Dubai’s crowd screaming for more!

Then Mohammad Ramadan – the Egyptian singing star with millions of followers – ignited fire among all – that saw the crowd dancing to his music. Sponsored by Milano, Filmfare Middle East Achievers’ Night had a long list of Pakistani celebrities including Mahira Khan, Maya Ali, Ahad Raza Mir and Humayun Saeed – who joined Bollywood celebrities at the event. 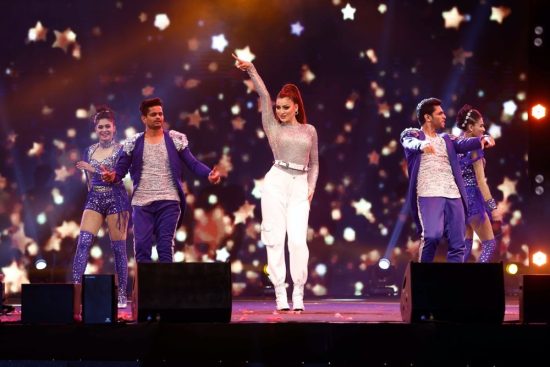 For a few hours, Meydan Grandstand became the melting pot of three different cultures in one place – Arab, Indian and Pakistani. It was the biggest congregation of international celebrities from South Asia and the Arab World – that the Middle East has ever seen to date.

Dubai has been a shooting venue for more than 84 international films including a few Hollywood and Bollywood blockbusters. The Filmfare Middle East Achievers Night raised the expectations of a future cross-border and cross cultural film production that could combine actors from Hollywood, Bollywood, Pakistan and the Arab World.

The Filmfare Middle East Achievers Night took place a few weeks after the opening of Dubai Expo 2020, and at a time when the UAE hosts the World Cup T20 tournament, right after the conclusion of the Indian Premier League, that has brought life in the UAE back to normalcy.

One of the biggest surprises of the Night was the Lifetime Achievement Award accorded to Zeenat Aman – former Miss India and Bollywood queen of the 1970s and 1980s, who delivered an emotional speech as she received her awards.

“This is an iconic moment for me. I won my first Filmfare Award exactly 50 years ago for my debut film in my first year in Hindi cinema. It is a full-circle moment today. This award is very, very special to me.”

Kajol Devgn, a heartthrob of the 1990s and the new millennium, told her fans to throng to the theatres as they are now open, after receiving the Filmfare Middle East Powerhouse Performer for over Two Decades.

“Theatres are now open, go buy tickets and watch them at the cinemas so that we can continue to make good films for you all,” Kajol said. 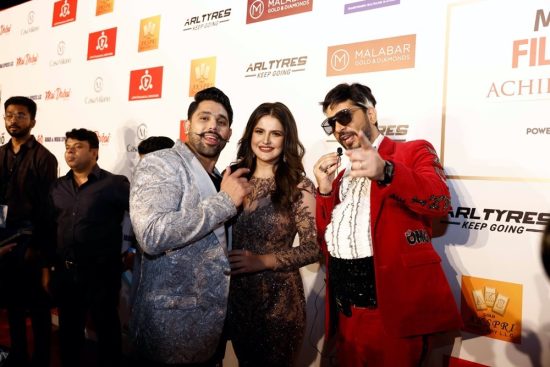 This is the first time Bollywood stars walked through a Red Carpet with Pakistani and Arab celebrities in Dubai – strengthening the city’s reputation as a melting pot of cultures, thanks to organizers Dubai-based diversified business conglomerate Danube Group and its media arm Starz Media which publishes Filmfare Middle East magazine.

The whole four-hour mega event converted Dubai into a mini-global village where celebrities from a diverse background, culture, region and nationalities came together to defy the odds – including COVID-19 related travel restrictions.

“Filmfare Middle East Achievers Night brought a lot of positive energy and I was happy to see that everyone enjoyed it and appreciated it, but almost all of them were overwhelmed at the fact that they all – coming from different countries with diverse cultural background – could join hands together to create a memorable event in Dubai.

“It has been our absolute honour to be able to bring so many important celebrities to Dubai and at the same event – at the same venue. This event will stand as a landmark event for Dubai – a melting pot of cultures – and Filmfare Middle East Achievers Night has shown that we all can do it. I am very much encouraged to do it again and perhaps make it an annual event – if things work out – in future.”

For most of the celebrities, it was their first proper outing in nearly two years. The mega event saw some of Hollywood stars being honoured for their role.

Nawazuddin Siddiqui, post receiving his award for Entertainer of the Year in Bollywood Cinema told the media, “The UAE government has done a wonderful job in containing COVID-19 pandemic so much so that it seems everything is normal here. This is amazing and reflects a good leadership.

“This not only helped the UAE residents, but also helped us to come here and enjoy the show. I thank the UAE Government and the organisers, especially Mr Rizwan Sajan and his team and family the way they have organized this mega event.”

Bollywood’s star of the 1970s and 1980s, Prem Chopra, who received the FFME Lifetime Achievement Award, said, “This is perhaps the best ever show I have attended and I feel so good here in Dubai. I thank the organizers for putting together such a wonderful show where I can see so many familiar faces.”

The group’s flagship company, Danube Building Materials FZCO, it is the largest supplier of quality buildingmaterials in the Gulf Cooperation Council (GCC) countries. It provides more than 25,000 products in stock and in-house value-added services in all of its multiple set of showrooms across the Middle East region and India.

The company operates from its head offices in JAFZA with logistics facilities across the region which amounts to 5 million square feet and includes kiln drying facility, factory and warehouses of the group.

From a small trading firm, Danube has grown into one of the largest building materials’ company in the region, with its diversified branches worldwide including UAE, Oman, Bahrain, Saudi Arabia, Qatar and India, in addition to procurement offices in China and Canada.

Danube Group has a team of 1,800 plus people working across strategic locations across the GCC and India.