The focus of the cross-country rallying world is on the UAE again in the final countdown to the Abu Dhabi Desert Challenge, as a major operation to stage the 30th edition of the spectacular event enters its final stages.

With many of the sport’s top drivers and riders assembling in the UAE capital for the start of the rally on 6 November, it has taken a complex team effort to set the stage for one of the sport’s most enduring tests on four and two wheels.

The cars, buggies, bikes and quads assembling at Yas Marina Circuit, the official HQ for the rally and its starting and finishing point, will tackle a new route laid out across the dramatic desert landscape of the Al Dhafra Region during months of preparation for their arrival. 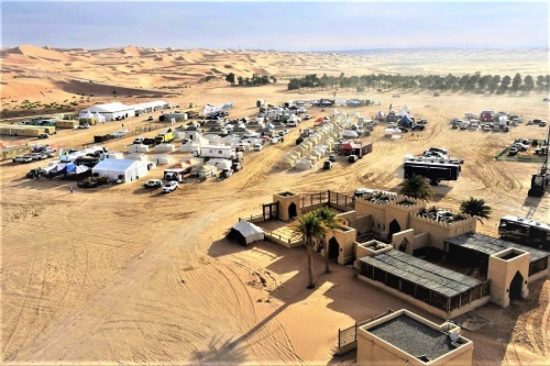 Penetrating the northern fringe of the legendary Rub’ al Khali, or Empty Quarter, desert stages of 262km, 333km, 293km, 251km and 216km are centred on a bivouac accommodating an 800-strong contingent of competitors, technicians, officials, medical staff, volunteers and media.
It takes 200 people, many often working through the night, to transform a normally bare desert location, surrounded by a sea of dunes, into a temporary rally village which serves as the event’s active desert base for five nights.
The process of its construction, on-event operations and eventual dismantling over the course of two months underlines the devotion of the rally organisers, the Emirates Motorsports Organization (EMSO), backed by the UAE Government and local authorities, to protect the region’s desert environment close to the Qasr Al Sarab Resort.
“This is a huge priority, and we’re indebted to the government authorities and the UAE Armed Forces for their support to set up and equip the bivouac, and make our environmental policies work so effectively,” said Mohammed Ben Sulayem, President of the EMSO and FIA Vice President for Sport.

The bulk of the bivouac’s infrastructure and power have been delivered by the UAE Armed Forces, and the bivouac’s portable and tended community is taking shape with the assistance of the Cultural Programs and Heritage Festivals Committee – Abu Dhabi.

When the full force of the rally arrives, teams from Al Dhafra Municipality and Tadweer will combine to provide round-the-clock upkeep of the site, including recycling of all waste to ensure no littering of the desert or oil leakages.

Meanwhile, Abu Dhabi Distribution Company will have systems in place to recycle around 20,000 gallons of water used daily at the location. It all adds up to a fully functional 24/7 bivouac, where mechanical repairs going on through the night have often rescued hopes damaged earlier in the day, turning casualties into Abu Dhabi Desert Challenge winners.
Some of the biggest dunes in the world stand in the way of competitors, and they won’t have to wait long for this year’s biggest test as the second of five desert stages flows into the Liwa Valleys for a classic cross country rally examination. This, and the following day’s leg, combine to form a new marathon stage for the bikes, with no outside assistance allowed in between.