LAZIO SPACE-REGION: THE INDUSTRY OF THE AEROSPACE SECTOR AT EXPO DUBAI

An industry related to the aerospace sector which employs 23,500 workers, 3000 researchers, ten great research institute, 5 billion of incomes and 2 billion of exports: this is the system that Regione Lazio, the region which has Rome as capital city, presented at Dubai yesterday during an event involving the most important Italian industries from the aerospace sector.

A unique system in the country, highly innovative and well linked, which goes from the environmental monitoring to precision agriculture, from natural emergencies management to the protection of strategic infrastructures and telehealth. There are many solutions aiming to ameliorate life conditions on our planet, which are granted by Regione Lazio, the Italian region hosting a complete production chain in the aerospace industry sector, that adopt an innovative model in order to interpret the great technological adventure. All of these were presented at the “FORUM LAZIO SPACE REGION. From Colleferro Space Capital 2022, the new challenges of the Space economy” with the attendance of representatives of Regione Lazio and some of the most important enterprises in the aerospace and economic sectors, such as Leonardo, Avio and Thales Alenia Space Italia. The event was organized by Lazio Innova, the innovation agency of Lazio (the Italian region whose capital is Rome), which is present at Expo 2020 Dubai with a whole series of events that will be held until next March.

The meeting, of an international nature, started with the presentation of “Colleferro City of Space 2022,” since the city will hold the presidency of the Community of the Cities of Ariane (Cva), the European association of space cities founded in 1988, next year. The Forum retraced the history of the city of Colleferro which, while being characterized by an industrial vocation, keeps looking to the future with a sustainable-development approach, planned through an urban regeneration program and new opportunities of training in order to attract young talents. The city is also a historic center of foundation and stronghold of the most important Italian aerospace industry, Avio, where the Vega launcher, an authentic Made in Italy masterpiece, was born. During the presentation, issues related to the activity programs planned for this year under the Italian presidency were addressed, involving the representatives of the Bordeaux metropolitan area, from which Colleferro will receive the baton of the presidency at the end of 2021.

Lazio is the second Italian region by Gross domestic product (Gdp) with 198 billion euros, contributing to 11.2 percent of the Italian national Gdp (2018 data), and its per capita Gdp around 33,600 euros, above the Italian and EU average. Furthermore, Lazio is home to one of the most important research and development systems in Italy, since hosting major industries and multinational groups with their own research and development centers. Lazio, is also the Italian region with the highest level of specialization in manufacturing and services for knowledge-intensive and high-tech. Again, Lazio’s share of exports in the main world sectors is twice the national average (72 percent versus 32 percent).

“Aerospace in Lazio means safety, development, research, quality employment, a future for young people. Our commitment is to enhance this excellence in the area and make it more and more a crucial factor for the sustainable development of our cities and our economy. The new program of European funds 2021-2027 gives us important resources to confirm Lazio as a world-class aerospace excellence. I also like to remember that at the center of today’s meeting there is the city of Colleferro, already a great reality of the regional industrial landscape, which in 2022 will play the important role of European Space Capital,” declares Nicola Zingaretti, President of Regione Lazio. 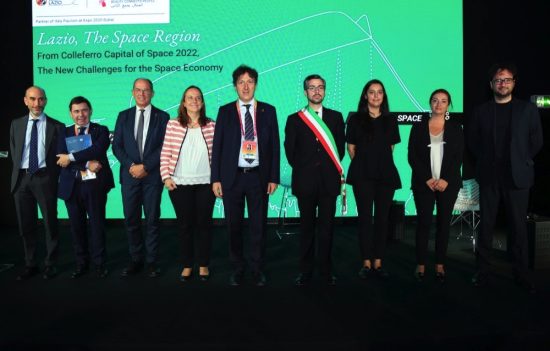 “Lazio’s aerospace industry is one of the driving sectors for regional economic development, thanks to the presence on the territory of a system of excellence made up of universities and research centers, and an entrepreneurial fabric with a very high level of specialization able to provide technologies and solutions in many areas of the economy, from agriculture, to safety, to the automotive sector. It is a sector on which we focus a lot and in which we will continue to invest, thanks also to the resources of the next Pnrr (Piano nazionale ripresa resilienza – National resilience recovery plan), in order to contribute to scientific and technological progress and to the development of a more sustainable economic model. Lazio has all the credentials to win this challenge and change the world with its small and large businesses, its researchers and its young talents. In this context, Colleferro, with its industries rooted in the territory for over a century and are an integral part of its identity, represents an absolute excellence at the European level in this sector, and fully deserves the role of European Capital of the Space. Title that will cover the next year,” added Paolo Orneli, Councilor for Economic Development, Commerce and Handcraft, University, Research, Start – Up and Innovation of the Regione Lazio.

Lazio plays an important and international role in the aerospace sector, aeronautic and economic sectors from both, an industrial-innovation, and research point of views. The Technological aerospace district of Lazio (Dta) was instituted in 2004 with an agreement signed by the Minister of Research and Regione Lazio, while in 2012 the Dta had been one of the founders of the Ctna (Cluster Tecnologico Nazionale Aerospazio – National Technological Aerospace Cluster). Today, Lazio is the center of an aerospace economy able to transfer benefits of its technologies to its own citizens, enterprises, communities, and territories.

Space technologies can be applied for the development of agriculture; environmental and hydrogeological risk monitoring; the prevention of emergencies; air traffic control; the improvement of telecommunication services. Not surprisingly, Lazio companies are at the forefront of participation in two important European programs related to space and Earth observation: Copernicus, the EU Earth observation program established in 2001 and meant to provide to the EU the ability to act autonomously in the safety and environmental sector through satellite surveys before 2021; Galileo, the European Union’s global satellite navigation system (GNSS), one of the largest and most ambitious European projects born from the collaboration of the European Union with the European Space Agency (ESA) aiming to create a satellite navigation system.

Since the beginning of Galileo Program, Italy had been covering an important role through the Italian Space Agency (Asi) and the involvement of the Italian industry, especially the Leonardo Group. Furthermore, in Lazio are present the most important Lsi (Thales Alenia Space, Avio e Telespazio), companies controlled or participated by Leonardo which has reached excellent results on a global scale, thanks to the role played by the district and the national cluster in promoting innovative production chains, and the synergic cooperation with the small and medium enterprises (Sme), universities and research centers.

The event is part of the “Space Week” celebrations underway at Expo 2020 Dubai from 17 to 23 October. The “Space Week” is one of the 10 thematic weeks led by Expo with the aim of finding collaborative solutions to some of the most urgent challenges of our time. Underway during the six months of Expo 2020 – which will end on March 31st – each of these thematics will focus on specific themes, including: agri-food; climate and biodiversity; health and wellness; urban and rural development; travel and connectivity. The Regione Lazio will promote a series of events in this area that will range from cinema to agri-food, from tourism in the health sector to ecological transition, from precision agriculture for environmental sustainability to Smart Cities and the enhancement of the culture of the territories.