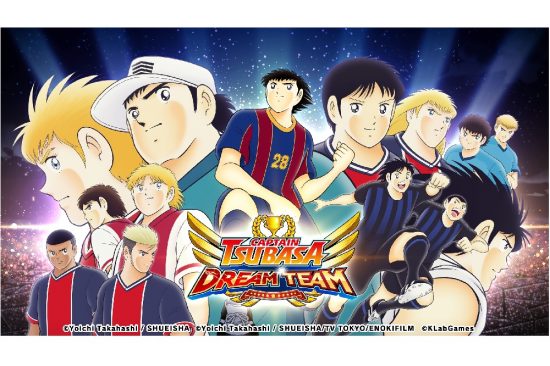 Various campaigns will be held both in and out of the game starting today in celebration. Also, a special preview video of “NEXT DREAM” will be available on the official Captain Tsubasa: Dream Team YouTube channel.

The plot for the new story “Next Dream” was created by Yoichi Takahashi, the original author of “Captain Tsubasa”, and will be produced by KLab under his supervision.

The story takes place after the Madrid Olympics in Captain Tsubasa Rising Sun, currently being serialized in the Grand Jump special edition Captain Tsubasa Magazine (Shueisha). It will highlight the appearances of familiar characters in new roles and brand new characters every month in the game.

In commemoration of “NEXT DREAM” various in-game campaigns are available starting today. These campaigns will include a login bonus, NEXT DREAM Transfer, daily missions, daily scenarios, Dreamball exchange update, and more. Be sure to check out the in-game notifications and official website for more information.

Created by Yoichi Takahashi, “Captain Tsubasa” is a Japanese manga that centers on the sport of football. Since premiering in Shueisha’s landmark manga anthology Weekly Shonen Jump in 1981, the series has grown into a legend that has inspired and delighted countless football fans around the world for decades.

Even after the end of the initial serialization, the story has continued to evolve with new works highlighting the growth and development of main character Tsubasa Ozora. The series’ popularity continues to thrive, with Captain Tsubasa Rising Sun finishing its appearance in Shueisha’s manga anthology, Grand Jump in 2019, and a special issue called Captain Tsubasa Magazine began serialization in 2020.

The series has sold over 70 million volumes in Japan alone. Captain Tsubasa’s popularity extends beyond borders, having been translated and published around the world in 20 languages, finding fans and winning the hearts of football lovers around the globe.