Set against the backdrop of the majestic Jebel Jais mountain in Ras Al Khaimah and forming the centrepiece of Al Hamra Village, Al Hamra Golf Club invited golfers of all levels – from seasoned professionals to fledgling enthusiasts – to play the game continuously for 24 hours and support people of determination. Members of the RAK Centre for People of Determination also got their chance to try golf for the very first time.

The initiative aimed to strengthen the relations of Ras Al Khaimah Club for People of Determination with organisations such as Al Hamra to raise funds to provide necessary physical, psychological, and intellectual care and attention to people of determination, enabling the young people to confidently integrate themselves in the society and engage in work across both the government and private sectors.

Al Hamra expressed appreciation for the initiative, which puts the interest of the people of determination as priority across Ras Al Khaimah. 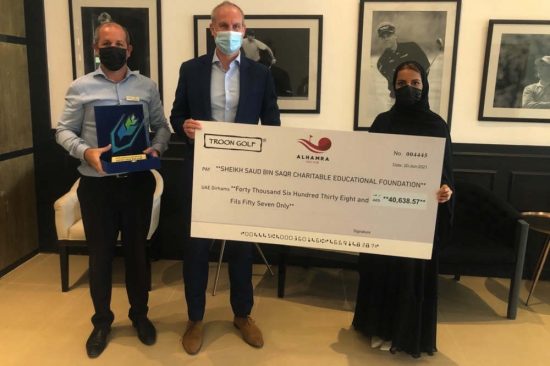 Al Hamra is a Ras Al Khaimah based real estate development and investment company. The group is focused on providing premier lifestyle real estate developments, while investing in hospitality and leisure segments. In line with the Emirate’s growth, Al Hamra has been instrumental in shaping the real estate landscape in the Emirate since its formation in 2003. The company is committed to reimagining life and hospitality through the friendly and safe environment Al Hamra Village has developed while also capitalising on the close proximity to Dubai, just 40 mins away, the financial benefits, the airport, and the free-trade zones. Entities under the Al Hamra brand name include Al Hamra Golf Club, Al Hamra Marina & Yacht Club, Al Hamra Mall, Manar Mall, the multi-award-winning Al Hamra Village and Al Hamra Real Estate Development. Al Hamra is also the developer of Waldorf Astoria Ras Al Khaimah and Ritz-Carlton Ras Al Khaimah, Al Hamra Beach. Follow Al Hamra on Instagram, Twitter, Facebook and LinkedIn for more updates.

Ras Al Khaimah (RAK) is the northernmost of the seven Emirates that make up the United Arab Emirates. It is known for its rich history, dating back 7,000 years, and diverse landscape, from 64km of pristine beaches, to terracotta deserts and an imposing mountain backdrop. The Emirate is home to the highest peak in the UAE, Jebel Jais, which features the world’s longest zip line, at almost 3km.

Ras Al Khaimah is also centrally located at the modern crossroad between Europe, Asia, and Africa, with one third of the world’s population within four hour’s flying time, making it an ideal location for businesses to expand into the UAE, the Middle East and Africa and beyond. Indeed, the World Bank’s Doing Business report ranks Ras Al Khaimah 30th out of 190 economies for ease of doing business.

For the past decade, Ras Al Khaimah has been consistently rated ‘A’ by Fitch and Standard & Poor’s rating agencies and already the Emirate is home to more than 38,000 businesses from 100 countries representing over 50 industries. RAK Courts is also the fastest court in the world at enforcing contracts in commercial disputes.