The event will welcome the world’s greatest professional runners to Al Marjan Island, Ras Al Khaimah, on Friday, 19th of February 2021. Given the flurry of record-breaking results of late, all are ready and eager to compete for the generous prize purse, worth a staggering AED 1,219,000, which is distributed across the front-runners of elites as well as the UAE National and age group categories.

Fierce competition is predicted in the male elite race with Kenyan Kibiwott Kandie and Ugandan Jacob Kiplimo both competing in next year’s event. With the historic record-breaking time of 57:32, Kandie recently claimed the title as the Half Marathon World Record Holder at November’s Valencia Half Marathon. Kiplimo, the 20-year-old long-distance runner came in a close second and previously claimed victory and his country’s first medal at the World Half Marathon Championships in Gdynia, Poland, in October 2020. 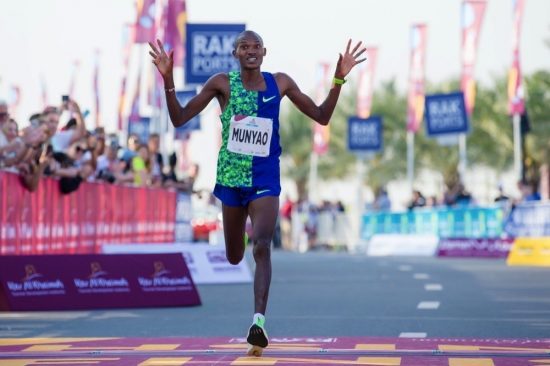 All set to join them for a fast race in February 2021 is Mosinet Geremew and Alexander Mutiso Munyao. Ethiopian runner Geremew won the Dubai Marathon in 2018 and came 2nd in the London Marathon in 2019 with a time of 2.02.55, clocking the 4th fastest time ever in that distance. He is also the current world silver medal holder for the 2019 World Marathon Champs. Meanwhile, Mutiso recently placed 4th in Valencia in 57.59 and was runner-up in the men’s 2020 Ras Al Khaimah Half Marathon in 59:16.

Returning to the race next year is Kenyan Stephen Kiprop who won the Ras Al Khaimah Half Marathon 2019, with a personal best time of 58.42, sharing the course record with Bedan Karoki. Karoki has also confirmed so we have a unique situation where the two course record holders will start together.

European half marathon record-holder Julien Wanders of Switzerland is also confirmed to return for yet another year, participating in the most anticipated race of 2021. In the Ras Al Khaimah Half Marathon 2019, Wanders set the record with a time of 59.13, coming 4th place overall, ahead of several other talented athletes.

Making his first Ras Al Khaimah Half Marathon appearance is Sondre Nordstadt Moen (Nor) – one of the fastest Europeans ever with a 2h05.48 PB in the marathon and 59.48 in half marathon. 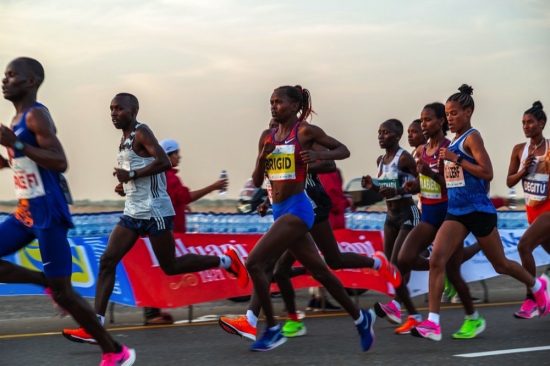 Expected to set a quick pace and deliver fierce competition in the women’s race is Peres Jepchirchir, who recently won the World Half Marathon Championship, held in Gdynia, Poland in October, in a time of 1.05.16 and setting a new world half marathon record in the women-only race. Ending her 2020 season on the highest note, Jepchirchir also celebrated victory at Valencia’s Marathon, clocking a women’s course record with her performance of 2.17.15 – 5th fifth fastest time in the history. No stranger to the Ras Al Khaimah Half Marathon, Peres was the 2017 Ras Al Khaimah Half Marathon winner, where she achieved her personal best time of 1.05.06.

Joining the world-class female field is Ruth Chepngetich, who recently clocked a remarkable time of 1.05.06 at the New Delhi Half Marathon. At the 20th Dubai Marathon (2019) Ruth won in a course record breaking time of 2.17.08, securing the world’s 4th best marathon time ever. She is also the current world marathon champion securing the title during the 2019 World Athletics Championships.

American sensation Sara Hall will also be competing following her outstanding performance in the London Marathon 2020, where she came 2nd with 2.22.01 on the clock, successfully overtaking many athletes in the second part of the race. This year Hall ran the Row River Half Marathon in 1:08:18, a personal record by 40 seconds and the sixth-fastest American of all time. 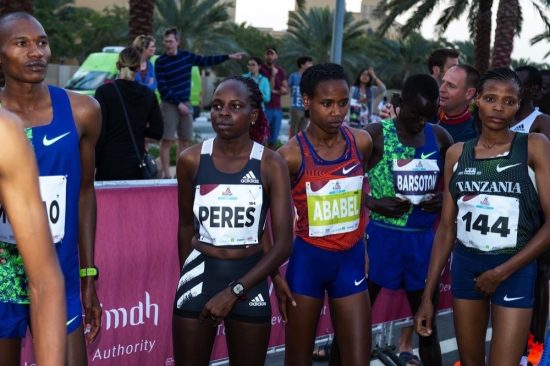 The winner of the New Delhi Half Marathon Ethiopian Yalemzerf Yehualaw is also confirmed. Her stellr effort of 64.46 is the second fastest half marathon time ever, so she is also one to watch.

Registration slots for the ‘World’s Greatest Half Marathon’ are rapidly filling up with over half the runners already signed up for the non-elite race. Additionally, registration is now open for the 5 km and 1 km races, set to take place in the late afternoon of 19th February 2021, following the main races. With limited spots available for all the races, runners are encouraged to register immediately.

Official race socks, priced at AED 60 plus VAT, can be purchased during registration with two sizes – UK 4-7 (EUR 36-40), UK 8-12 (EUR 42-47) – available, while participants can also personalise their t-shirt for AED 80 plus VAT, which is only available until the end of December.

The Ras Al Khaimah Half Marathon 2021 is a Bureau Veritas safety certified event, with stringent safety measures to be implemented across the board to safeguard participants, volunteers, guests and residents, aligned with global best practice and national federal directives.

Ras Al Khaimah (RAK) is the northernmost of the seven Emirates that make up the United Arab Emirates. It is known for its rich history, dating back 7,000 years, and diverse landscape, from 64km of pristine beaches, to terracotta deserts and an imposing mountain backdrop. The Emirate is home to the highest peak in the UAE, Jebel Jais, standing at 1,934 meters and featuring the world’s longest zip line, at almost 3km.

Ras Al Khaimah is also centrally located at the modern crossroad between Europe, Asia and Africa, with one third of the world’s population within four hour’s flying time, making it an ideal location for businesses to expand into the UAE, the Middle East and Africa and beyond. Indeed, the World Bank’s Doing Business report ranks Ras Al Khaimah 30th out of 190 economies for ease of doing business.

Ras Al Khaimah is also a cultural melting pot with a growing population, currently at about 375,000, 31% of which is local Emirati. It is considered an extremely safe place to live, consistently ranked highly in global surveys.

With year-round sunshine, straightforward business set-up and a competitive and affordable cost of living, Ras Al Khaimah is the informed choice for business, lifestyle and travel.