Abu Dhabi, UAE – October 17, 2020: In seven days, Abu Dhabi will welcome the return of crowd favourite Khabib Nurmagomedov to the UFC octagon for the first time since his victory over Dustin Poirier at UFC® 242 in the emirate back in September 2019.

Khabib, nicknamed ‘The Eagle’, seek to retain his lightweight title and undefeated status when he faces the lightweight division’s interim champion Justin Gaethje at UFC® 254 on October 24. The much-anticipated champion vs champion match-up is the main event of UFC® 254. It is also final bout of a thrilling 59-fight Return to Fight Island, the five-event mega series currently taking place on Abu Dhabi’s Yas Island.

The Russian fighter produced a dominating display in his last Octagon appearance, defeating American opponent Poirier by submission in round three of their Abu Dhabi Showdown Week main event last year, which was also held on Yas Island. In the coming week Nurmagomedov will be hoping to continue his successful run in Abu Dhabi.

“All the time I come back here to the UAE and fighting in Abu Dhabi. For me, it’s like I’m fighting in my home. I feel great with this. This is an amazing place,” said Khabib previously

However, Gaethje has arrived in Abu Dhabi in great form following his May victory over Tony Ferguson, which saw him named interim champion in Khabib’s Octagon absence due to COVID-19 restrictions.

Return to Fight Island has already recorded a number of milestones and ensured the health and safety of more than 2,500 people housed inside the innovative UFC Fight Island safe zone bubble. 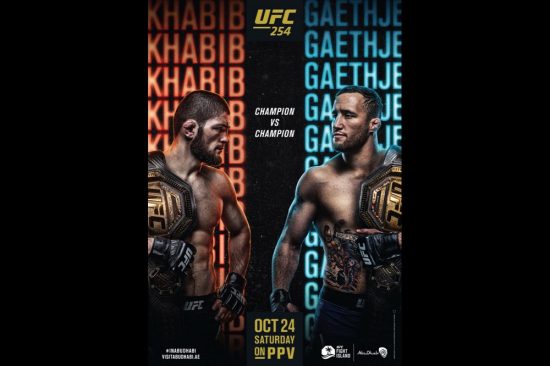 About the Department of Culture and Tourism – Abu Dhabi

The Department of Culture and Tourism conserves and promotes the heritage and culture of Abu Dhabi emirate and leverages them in the development of a world-class, sustainable destination of distinction, which enriches the lives of visitors and residents alike. The organisation manages the emirate’s tourism sector and markets the destination internationally through a wide range of activities aimed at attracting visitors and investment. Its policies, plans and programmes relate to the preservation of heritage and culture, including protecting archaeological and historical sites and to developing museums, including Zayed National Museum, Guggenheim Abu Dhabi, and Louvre Abu Dhabi. DCT Abu Dhabi also supports intellectual and artistic activities and cultural events to nurture a rich cultural environment and honour the emirate’s heritage. A key role is to create synergy in the destination’s development through close co-ordination with its wide-ranging stakeholder base.

UFC® is the world’s premier mixed martial arts (MMA) organization, with more than 318 million fans and 102 million social media followers. The organization produces more than 40 live events annually in some of the most prestigious arenas around the world, while broadcasting to nearly one billion TV households across more than 175 countries. UFC’s athlete roster features the world’s best MMA athletes, representing more than 65 countries. The organization’s digital offerings include UFC FIGHT PASS®, the world’s leading streaming service for combat sports. UFC was acquired in 2016 by global entertainment, sports and content company Endeavor and strategic investors Silver Lake Partners and KKR. UFC is headquartered in Las Vegas, Nevada. For more information, visit UFC.com and follow UFC at Facebook.com/UFC, Twitter, Snapchat and Instagram: @UFC