No one knows which country makes the first vaccine for Covid 19, but the world’s first movie on Coronavirus is already shot by an Indian director. While a large part of the world is in complete lockdown with no work in hand, RGV (Ram Gopal Varma), a popular Indian film maker has produced and directed the film with the title “Coronavirus”. He declared that the film was completely shot indoor.

The trailer of the film, released a couple of days ago,  has reached the mobiles of not only the Indians but also making rounds across the globe due to its universal subject. The trailer with English subtitles on youtube has already garnered more than 4 Million views.

Indian film star Amitabh Bachchan has also tweeted about this : @srbachchan: “The irrepressible Ram Gopal Varma, ‘Ramu’ to many .. ‘Sarkaaar’ to me .. makes an entire film about a family in Lockdown, shot during Lockdown ..Titled : CORONAVIRUS  .. perhaps the first film to be made on the virus ..This be the TRAILER ..”

Replying to a tweet by writer Sirasri about this film, the film maker RGV mentioned in lighter note, “Well, the CORONAVIRUS film news is spreading faster than the real CORONAVIRUS..I hope the film will overwhelm the VIRUS and KILL it”. 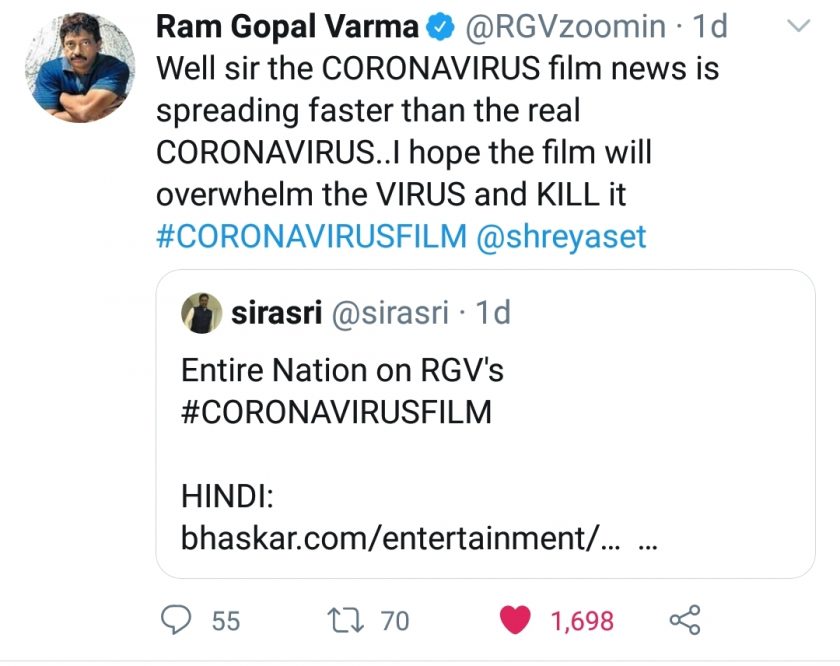 The film is made in Telugu, the first most spoken language in entire South India, and probably getting dubbed into Hindi and other languages. The film is about to hit any OTT platform very soon with English, Arabic and Spanish subtitles as per the sources.